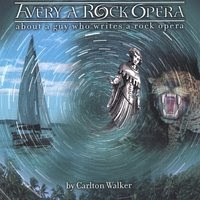 Carlton Walker is a composer/musician and he has created a story of AVERY - "a guy who works a rock opera " . This is one untipical, but at the same time in most elements autobiographical story, and a rock opera within a rock opera. A key inspirtation for the themes/tales from album, he has received from the period of living in Central America where he did a foreighn study in archeology. A politics, ecology, human nature are also therithories of interests in his lyrical views. Carlton has offered a complexive album materials, but at the same time with strong performing includings and with the presence of inteligent arrangments works.
His vocal harmonizations are also a very valuable elements of general performing details . Musically "Avery..." finds a key inspiration in Genesis/Gabriel saga " The Lamb Lies Down On Broadway" , and one mid 70's pastiche is present on tracks from album in general.Even that Carlton cites also a Pete Towshand/ "Quadrophenia" as a inspiration, I didn' t find some strongest comparabilities, with his views and messages. "Avery..." is promising and inspirative album, worth listeners attention.