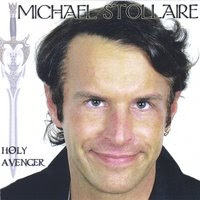 Michael Stollaire is a singer/songwriter and multi instrumentalist, active as a musician from his earliest age.His musical interests ranges variety of styles and genres, and he has included his performing and authors views in different fields. "Holy Avanger " is his actuelle full-length, before that he has recorded a 1 EP and 1 Demo issue.
" Holy Avanger" finds himself in position of so call one-man band, and he did all things by himself. Complete materials are consists of authors works, and Michael's songs reaches different areas. One rock option with pop includings dominates, but a mentioned rock variant is different from song to song. Some tunes are more heavier than others, some are more on power pop therithories, some posses a strongest playing in the back.... Unfortunatelly arrangments didn' t
satisfies, as same as production . Also, his materials will hardly find a loyal fan base nowadays...