Demencia Mortalis - No God Is Here 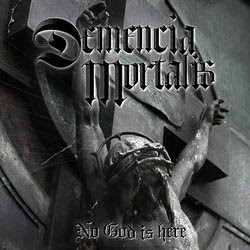 Demencia Mortalis - No God Is Here

Out of Czech Republic comes band Demencia Mortalis, founded back in 2004 year. During the period of existence they have released firstly a Demo with 5 tracks in, entitled simply " Demo 2006", and finally at the end of previous 2008 year, a full-length album "No God Is Here" looked
the light of day. A band has recorded and release its actuelle issue with own forces. A general "dark" atmosphere could be dominate factor, if we start to analyze design of its CD's cover , but even of some evident melanholic traces in its realizations, their gothic metal isn' t less acceptable for possible fan basis and genre's followers. Demencia Mortalis tries to mix up classic gothic elements locate in glory 80's with death and thrash metal tendencies. Female falseto vocalizations makes constant dialogies with male growl includings, and each of present tracks posses a similiar screenplay. Some songs are done in mid to mid-up tempo, but also egzists a faster performing realizations. One interesting thing comes to mind after few listenings of its materials, and that's a fact, that band in general posses one more optimistic message. This is certainly a rare case if we speak about gothic acts. "No God Is Here" as a album has some not so important failurs, but untipical performing passionate ,and in the same line offering energy, are winning combinations at last.