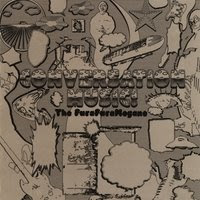 A newer interesting act comes out from Japan. They work as a classic trio, and called themselves - THE FURA FURA MEGANE. Their music finds inspiration and stylish traces in golden 70's period, and band also named a several influental acts, as a : Led Zeppelin, Bob Dylan, The Jimi Hendrix Experience, Cream, Neil Young... They love improvizations, and oftenly do that, and its music is full of performing challengies. "Conversation Music" comphrise a 10 tracks. A band sung in Japanese, but realistically has showed its own capabilities.
A songs are different among them, and maybe surprisingly,their materials also posses evident melodic lines. A 70's period is main inspiration, and band also has putted productional realizations in same manner. "Conversation Music" is more than interesting product, and I would add that Japanese fellows has showed a respectable qualities.
Their music is equally inspirative and convinceble, so don' t hesitate and find band somewhere in Internet space, or eventually if you have a luck in concert atmosphere.