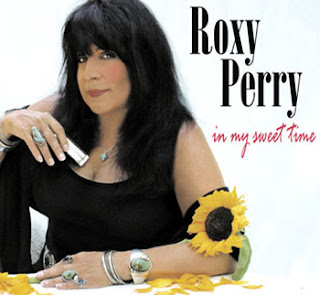 A blues carrear of "New York Blues Queen" Roxy Perry started in the second part of the 80's, and throughout the following period , she never dissapointed her followers and blues freaks. She is a singer/songwriter, also harpist, and at the same time producer and arranger of her albums.
"In My Sweet Time" is actuelle one, released during the previous 2008 year, where we can find 12 tracks in. A music of Roxy and here band basically cover a blues variants, but also performing elements touches many other interesting fields as a rock, blues- rock, swing, jive, and even funk and groovy options. Her voice posses narative approach, but at the same time emotional threathenings and same shapes characterize presentations of offerings songs. As a singer she also reflects a unconvincional energy. Songs from "In My Sweet Time " album are expectingly different among them, and part of materials we could locate somewhere in the 50's, others in the 70's or 80's period, but even of that ,her band has delivered a fresh and at the same time modern sound, and what is more important a modern performing message.
"In My Sweet Time" as a album has a many inspirative places, simply needs to be discovered , and most of offering materials deserves again listenings. And one song in my opinion deserve a special attention, and that's a 5th track on album, called "Blues Comes To Call".