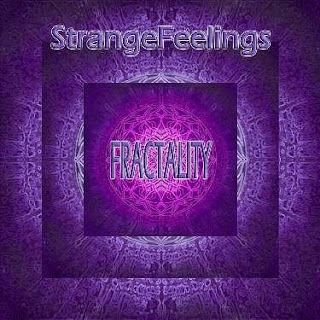 
A Czech band Strange Feelings started its carrear back in 2001 year, but all serious things was happened during the 2005 year. A year later, they did a first gig, and in 2007. a band introduced its works with promo CD offering, called "Jokebox". During the previous year, they recorded a debut full-length, and album "Fractality " group releases as a self-financed product.
Strange Feelings works as a quartet, and its offering shows that members from band posses evident performing compatibilities. They have offered a 8 tracks, duration a little more than 30 minutes. "Fractality" covers a mostly death metal approach, but at the same time with evident power and thrash metal includings. Some of its songs posses slower, down-tempo atmosphere and some associations also leads to doom tendencies, even that band didn' t communicate with mentioned form. A growl vocalizations are interestingly threathed, and I would add also different from usual death metal shouting comparazitions. "Fractality" as a album posses enough elements of originality, even of facts that some songs are evidently "better" than the others, or better to say a band didn' t sustain to finalize offering ideas in same manner. But, a most important elements of valuabilities in its case belongs to mentioned authors and performing
originality.