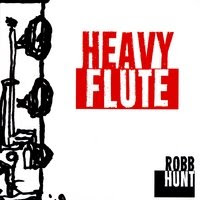 "Heavy Flute" is very unique and eclectic actuelle issue of Robb Hunt. He did all flute playings, and his album he has recorded with 4 asistents/collaborators - Naim Satya, who was response for bass, Joe Delia, who performs piano on 2 tracks, and Alan Levine and Paul Distel who played drums. "Heavy Flute" are consists of 4 longest tracks - " Mah Jong" ( Shorter ), "Soul Eyes" ( Waldron ), " Israel " ( Caris ) and "Old Folks " ( Hill, Robinson ), but all of them were done in one unusual and untipical way. Complete materials has sounded with evident 70's flavours, and present groovy tendencies also trucked to mentioned period. It seems that all of present themes
also has sounded as a one imaginary soundtrack from mentioned era, and one pastiche from the past,describes complete Robb Hunt's offerings. I would add that production also reminds on 70's period, and as a result we have one unusual but at the same time interesting product. For all folowers of 70's jazz/groovy tendencies, and with flute as a leading instrument, this album is a real jewel.