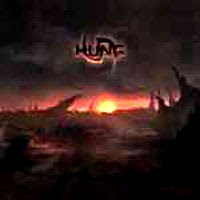 Hung is a New York based band, formed back in 2005 year. They work in quintet formation, but one of most interesting thing is that they have in line-up a violin as a also leading instrument. Lyris Hung is violin performer, and together with guitarist Evil Jon, she create an unusual performing approach. "Progeny" is their second effort, where we can find a 5 longest tracks duration a little less than 35 minutes.
Hung is on therithory of progressive death metal of older school, but mentioned untipical instrumentalizations, has created a specific sound.
A group has offered an interesting arrangments works, where influences comes out from different areas. But they are also faithfull to one evident underground psychology, and all of offering songs also posses something taken from so call minimalistic views.A darker and melanhollic atmospheres dominates through present songs, and it's worth to say that all of tracks posses equalizing valuabilities. "Progeny" is untipical death metal offering, but worth listeners attention.