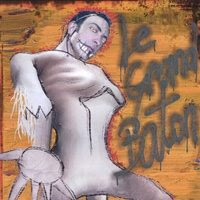 Le Grand Baton is a brainchild of gutarist/composer/singer Jean-Christophe Maillard, also known as Mbutu, a native Carribbean and resident in France. A s/t album is a his latest issue, and as I saw from web informations, he did a lotta' effort in promotional activities, so his product has received a many mostly positive reviews/reactions. His band are consists of members from France, The Carribbeans and USA, and all of them has given a maximum efforts that all things in final get funkcionize as well.
As a well-experienced musician and author Jean-Christophe in some way has tested his creativities, communicated with many stylish and performing options. There's no doubt that he deserve only respect for his authors work and evident original views, so his "s/t album are full of unexpecting and in the same time challenging places. A present songs/themes were performed in different manner, and we can find here and there something taken from Frank Zappa legacies, King Crimson free avangarde/progressive kitchen, Primus plying "brutality", and all of that fullfield with folk/roots idioms. Overdriven and fuzzy guitar passages are mixing with national "slave drum" KA, so as a result we can hear many so call "strange" but at the same time inspirative sounds/reflections. A songs are mostly written in CREOLE language, where dinamic
motorization has followed practically complete materials. Le Grand Baton's "s/t issue could be a one of most original product released during the previous year if we speak about progressive/avangarde and generally crossover options.