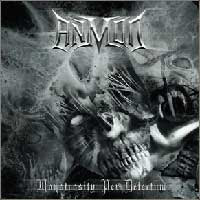 During the 2005 year a band Anmod was founded on the ashes of known act Fornication, whose carrear dated from 1996 year. Through mention period a Fornication has recorded a 2 albums, and released a succesfull tour over the European countries. Their actuelle issue Anmod release for Holland label " Deity Down Records ". They work as a trio, and its conception combines brutal variants of death metal with strong grind additionals. There are 12 tracks on album, conceptually threathed on similiar way, where influences comes out from the 90's death metal, as same as from the fields of newer extreme tendencies.

In some places album is overproduced, and mixing of drums passages is mainly a little louder. A band played its songs in faster to faster-up tempo, where mentioned brutality followed-up a complete album materials without exceptions. A mebers from band didn' t left any misunderstandings about its conception, so a followers of legacy of groups such as a Disgorge or Deeds Of Flesh, could be quite satisfied with the debut of Brazilians.