JOHN HULDT - Rules Do Not Apply 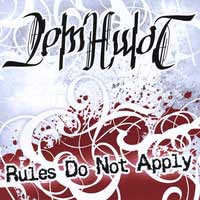 JOHN HULDT - Rules Do Not Apply

A Swedish born guitar player John Huldt during the 2006 year, has relocated to L.A. and started stydiing " L.A. Music Academy". With 2 friends, a drummer Kai Drakopoulos and bassist Phillip Bynoe, who among others participated 6 years in Steve Vai's group, strated to create an album materials, and few months ago his debut looked the light of day. "Rules Do Not Apply" is an instrumental issue, where John tried to announce his performing and authors interesting spheres.

There are 10 instrumental themes on album, mainly different among them, who are consists of various genres variations, from rock options to to fusion/jazz rock elements, and clear melodic traces as well. John has offered often mood changes, judging by his performing travellings, but album also characterize a vivid arrangments creations as well. John as a guitarist also performs emotionally and why not say lirically. Finally, "Rules Do Not Apply" as a album, satisfies enough his owner, and that's a good reason for potential listeners to check guitarists's carrear in the future.