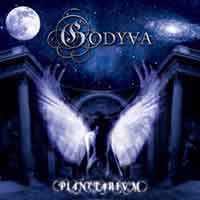 Out of Bari comes comes Godyva a band whose carrear dated from 2000 year. Through all these years they practically didn' t change a formation. In line-up band has female fronted singer Lady Godyva, and her method of interpretation in many aspects create a song structures. Their discography contains of 2 full-lengths and 1 Demo. Actuelle CD "Planetarium" band released in April this year for "Razar Ice Records". Godyva introduced itself with 13 themes on album, and musically one clear direction leads to gothic metal sources. Some comparative elements leads to Gathering legacy, but melodicity and performing expressions has showed band own identities.

"Planetarium" as a album cover many interesting details and quite good songs, but for my taste a members from band generally follows up one certain maniristic line. A production didn' t "react" on modern tendencies, and more concentrates on melodic side of group's approach. Finally "Planetarium" has sounded as a issue with more so call "romantic" elements then situation is in many similiar goth/metal albums, and probably it could be interesting for the followers of band.