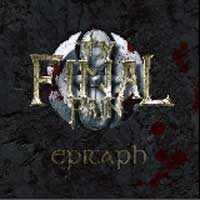 Out of southern part of Germany comes act Thy Final Pain, founded by Simon Dorn and Marc Juttner, a former members of well-known group Debauchery. They were working hard on actuelle album materials, whose realizations band did with own forces, as a self-released issue. But they still search a record label who eventually will stand behind them. There's no doubt that members of German group are musicians with big experience behind, and they certainly knows in which direction, its message will come.

In some way "Epitaph" is a conceptual album, followed by strong death metal approach, and there's no doubt that its death is under clear influences of older school, comes out from 90's period. But, very well produced, taped, recorded and released offering materials, shows that all technical details funkcionized in its case as well. 51 minutes of music follows up one constant performing line, and in each places we can face it with maturity of acters from band.In my opinion, "Epitaph" is album which qualities satisfies equally members from band and potential fan population, which devotionals belongs to death as a genre.