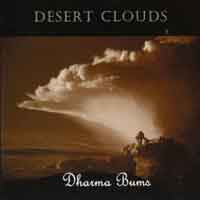 Italian act Desert Clouds is active from 2000 year. A group work in quintet formation, and during the last days of previous 2007 year, they introduced itself with Demo EP, entitled "Dharma Bums". They cooperate with well-known "Kick Promotion Agency", and as I have been informed by the internet news, their issue is well introduced in national media portals. "Dharma Bums", a strange title for EP, introduce Italians, as a act who combine elements of indie rock, folk and psychedelic.And their mixing musical elements also communicate with different periods.

In offering songs we can find traces of post new wave era, 60's psychedelic and national folk rock. Their songs also posses dreamy atmosphere, as same as some sort of dark pastiche. Also, all of 6 present tracks are structurally mostly different among them.I have to say, that I' m not so familiar with band's message, and have to add that in some places they offered some good ideas, but finalization isn' t acceptable in expecting form.