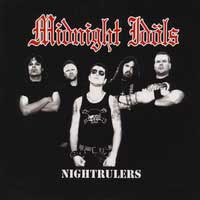 Out of Seattle, comes band Midnight Idols. They work as a quintet, and first album has recorded during the 2006 year. Actuelle full-length "Nightrulers" looked the light of day some months ago. A group is musically absolutelly devotion to its vision of 80's hard rock and metal, specially to NWOBHM legacies.Even that they mentioned as a influences groups as a : Maiden, Priest and Saxon, in my opinion their approach is more orientire to styles of groups as a : Bitches Sin, Gaskin or Jaguar, also acts who belongs to NWOBHM heritages.

A production itself and one specific method of performing, leads their songs also to one additional garage variant, and that's evident on each of 7 offering tracks, and near 27 minutes of music. A band is absolutelly honest to its performing option, and that's also clear after listening of complete album. As a band ,Midnigh Idols could be interesting to followers of 80's metal, and general could be attractive to fans of older school.