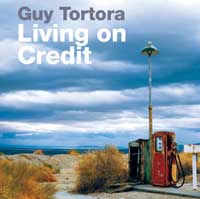 Out of Pasadena, California comes Guy Tortora, blues and roots guitarist and performer, last years settled in London, UK. His carrear finds a respectable attention of blues audience, and he is also often guest of several European blues festivals and events. He shared a stage with such names as a Peter Green or John Mayall, and he also performs in few combination: alone, as a duo, and with a band. Before his actuelle issue,his previous albums : " Footnote To The Blues" ( 2002 ) and "Jefferson Drive" ( 2004 ) also received a evident respect in blues community.

"Living On Credit" with 11 + 1 bonus track realistically introduce Tortora's interesting fields, from acoustic blues, roots and americana variants, to country and even jazz. With same passion and soul he plays own materials as same as covers, and his specific feeling simply is part of his performing creations. His music also hasn' t a times boundaries, and that's another important element. My personal favorites of this extraordinary album are : "Cotton Was King" and well-known Curtis Mayfield's classic "People Get Ready".