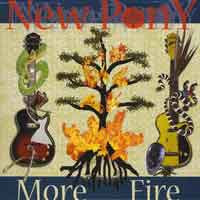 Out of Philadelphia, PA comes band New Pony, and plays in own way variant of music established in New Orleans area during the years. So, I have in mind blues, funk, roots music, and many things in-between. A group was formed by the key member, singer, guitarist and author Chris Devenney, and his collaborators are well experienced musicians and professionals. From the day of foundation, and that was in 2006 year, they are constantly in the saddle, and in the begining of the 2008, they release a debut, entitled " More Fire". In their music are evident influences comes out from the 70's period, and first associations leads to well-known Little Feat.

Through its approach a band has accepted all the known elements, which characterize New Orleans sound, as a funk, blues fullfield with accordian playing, so there are also hidden zydeco elements, and some traces surelly comes to Neville Brothers legacy as well. But, all of 11 offering themes posses evident listenable dimension, where well-done arangments creations, speaks about huge experience of all acters from band. As a album "More Fire" is equally acceptable for older blues fans, and followers of newer jam rock groups.