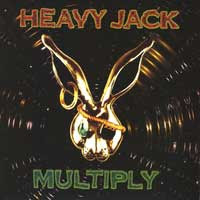 A group Heavy Jack are consists of three brothers Falk : Ben, Adam and Jon. And band also work in same formation - that was very often line-up looking back in the 70's. A music of mentioned fellows communicate with the flavour of 70's period, and band' s orientation is variant of hard rock and rock with strong blues roots. But, Heavy Jack aren't bunch of uninteresting immitators, and as a band they offers own view and formula. They introduced itself with 8 tracks on album "Multiply", where among them we can find 3 covers : - "Jumpin Jack Flash" ( The Rolling Stones ), "Bandits In The Night", and "Fly Away" ( Black Crow ) - last two recorded "alive". A band has sounded pretty strong and convinceble, and their materials are listenable and acceptable as well.

I couldn' t clearly compare them with any of popular band on today's scene, even that we can confirm that some of songs from its repertoire sounds known and "familiar". But Heavy Jack belongs to sort of groups which I would always ratherly recomand. Under the mentioned musical options "Multiply" is a promising album, whose valuabilities covers a respectable potentials of members from band.