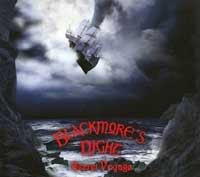 A current Richie Blackmore's and Candice Night issue looked the light of day during the summertime in Europe and USA. After last splited-up with Purple, Richie's researches through medieval therithory and renneisance fields together with Candice Night found a respectable interests both in critics and audience. Through acoustical ambient and themes who reminds us on ancient times, a mentioned duo has offered own original views judging by vivid authors creations. Unfortunatelly, duo didn' t change enough in its authors offerings, in most of following albums, so the story has been repeated from album to album.

"Secret Voyage" one more time repeats all of well-known elements from previous issues, and one more time we can face it with expecting medieval and sophisticated ethno details. A cover versions of Rainbow song "Rainbow Eyes" and tune well-known from Elvis Presley's repertoir - "Can' t Help Fallong In Love", without any expecting results, tried to find another performing exit, outside known circuit. Album materials on the other side, maybe more than others comes in Ennya/Clannad therithory, but also is less interesting then previous issues. "Secret Voyage" one more time define evident authors crises under the Blackmore's Night roof.