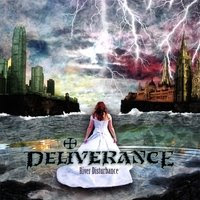 A veterans of USA christian metal scene Deliverance are back in the center of activities, cos' its cult album from 1994 year "River Disturbance" is reissued for "Retroactive Records". A band was founded back in 1985 year, and started as a thrash act, but during the following period, in some aspects has changed a direction.Actuelle reissue are consists of new artwork creation, a fully remastered songs, and additional bonuses of 4 tracks.
"River Of Disturbance" is some sort of saga, rich of strong emotional statements, colourfull arrangments realizations, and made of excellent hard rock and progressive metal elements. A group of Jimmy P. Brown in the time of first album relaization, has offered a many innovative details under the prog. metal as a genre, and "River Disturbance" today sounds equally fresh, like the case was in mentioned 1994 year. Practically, album didn' t show any less interesting parts, or less convinceble elements, so still stand strong with all previous valuabilities.