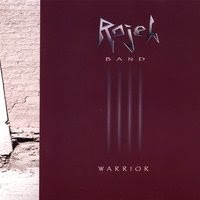 A newer name on USA scene belongs to group ROJEH BAND, whose formation are consists of four members, leading by frontman Rojeh Gino and guitarist/multi instrumentalist Shaun Drew.A some period ago, they released album entitled "Warrior". Judging by lirical offerings, American band on emotive and socialy defined way showes its interesting spheres.
Musically many forms finds its place through their sound, and we can find here rock/arena rock/power pop/ post new wave ... elements as well. There are 10 tracks on album, done with evident arrangments/producing complexities. After listening of complete album, I have to say that band maybe accedentally has accepted influences comes out from British post new wave/pop period, dated in crossing time between first and second part of the 80's.

A musical legacies of Nick Kershaw and Howard Jones comes to mind firstly, but also we can find another similiar traces."Warrior" as a album are consists of not so easy to acceptable materials, even that band had offered a lotta' effort in complete realizations. 2 tracks I would mention as a favourables : "Shades Of You", and closing theme "Forever".