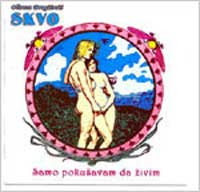 For all of less-informed, Olivera Dragicevic aka Skvo, is a longest time active on domestic scene. She performed a lot in Belgrade club circuit as a bass player, and most of period she spent in Old Spice group.Later on, she started as a singer too, and also as a tenement gutar player. A few years before, she released a debut album for "PGP RTS", and a some period ago actuelle second full-length entitled "Samo pokusavam da zivim", for "Rock Express Records". Skvo is well-known with her absolute conservative attitude and approach to legacy of 70's period, and tipically of Ex-Yu therithory.She also introduced herself performing with former well-known and established artists, popular in mentioned 70's period, and her actuelle album in some way suppose to be a hommage to idols, still actuelle and alive on scene.
"Samo pokusavam da zivim" are consists of 9 tracks in, as well as with multimedia and video clips bonuses. She teamed up on album with Bora Corba, other members from Riblja Corba band, R.M. Tocak, Bata Kostic ( Ex-Yu Grupa ), Dadi Stojanovic ( Zona B. ), Proja ( Fuzzbox ), Babura ( Ex- Siluete ), her fellow son Pera, Scepa ( Nightshift )... All of the present musicians and guests has given a specific flavour to offering materials, and it's clear that all of the tracks where they participated had also a pastiche of it's former groups.So, one expecting approach of 70's is present here and there, and all of the followers of tipically Ex-Yu 70's, can find something interesting in offering materials.But, I have to say one more time that Olivera's traditional conservative approach ,in several aspects eliminate communications with standards of our time, facing her carrear with mentioned facts all those years.