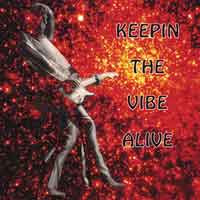 Guitarist Mick Mashbir is a long-time period in the saddle. During the 70's he was part of Alice Cooper's band, and he played on "Billion Dollar Babies" and "Muscle Of Love" albums, and also toured on mentioned issues promotional concerts.He also toured with FLO & EDDIE, and in 1985 he was part of legendary The Turtles band. "Keepin The Vibe Alive" is a debut solo effort, where we can find something of his interesting fields. Mick also authorized his huge experience in all of 10 present tracks, whose psychological threathenings belongs to 70's period as well.

Offering material is something between classic rock, 70's rock and hard rock, and honestly author didn' t avoid glam period, as same as something from IGGY-Stooges legacy. All followers of mentioned music forms, can find many pleasent and interesting moments in Mick's album. "Keepin The Vibe Alive" are consists mostly of coherent songs with clear and evident mesages.