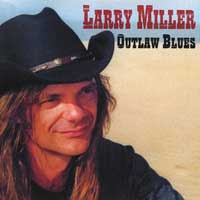 A foreighn medias are full of compliments when they describes qualities of British blues guitarist and singer Larry Miller. His carrear is constantly up, and till now they had released with actuelle one, 5 albums : "Man On A Million", "Larrycoaster", "Live 'n' Loud", "Fearless" and "Outlaw Blues". In UK many reviewers compare his works with the legacy of Rory Gallagher and Stevie Ray Vaughn, and that's certainly not so far from truth. " Outlaw Blues" is actuelle album with 10 tracks in, and guitarist has recorded materials with 3 colaborators/musicians : Scott Hunter is a drummer, Neil Sadler - bass player, and Matt Empson played a keybords and harmonica.

"Outlaw Blues" is an album where we can find explosive blues rock themes, acoustic tunes where guitarist showed us his skillful slide techniques, and "standard" rhythm and blues variations, nearer to psychology of 70's period. I would mention one another influence in Larry's music background, and that's a George Thorgood, but honestly, a British performer offered quite enough originality. There's no doubt that Miller's works posses evident qualities , and his actuelle album deserve only respect with big R.