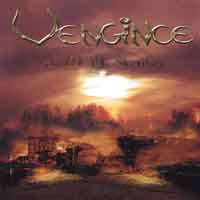 USA act Vengince is active on scene a longest period, and till now they performed a more than 300 shows around the state. A band has also shared a stage with many genre's established acts. A first "Vengince" s/t album a group released in 2003 year. "As It All Sours" is actuelle issue, and mambers from band has a lotta' expectations. Vengince are on the field of modernly performed metal, combined with agressive hardcore and thrash elements. A vocal is constantly between screaming lines and grouls phrases. I can say that group draws some influences from the 90's period, but mentioned details are skillfully performed through nowadays standards.

There are 10+3 bonus tracks on album. It seems that productional work is perfectly done, but I would add that in some places a songs has sounded a little more overproduced. A key element of mentioned songs is also a often tempo and mood changes. A band should promote on stage "As It All Sours", at the end of a year in Europe, so this is a good chance that audience in continent face them alive.

Labels: VENGINCE - As It All Sours