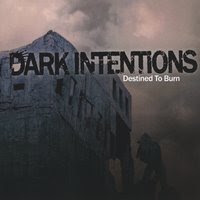 DARK INTENTIONS - Destined To Burn
Written by Branimir Lokner
Wednesday, 22 October 2008
DARK INTENTIONS" Destined To Burn "
( Deity Down Records ) 2008.
CD - HOLLAND
Thrash metal/hardcore/crossover
Out of town Breda comes band Dark Intentions, active on domestic scene from 2002 year. Judging by the facts that all the members from band had the different musical backgrounds, in group's genre's offering also exists a few different influences comes out from several areas. Their carrear also passed with continious followings, as same as discography. Firstly, a band release in 2004 year Demo with 3 tracks in, entitled "Survival Is Not An Option", and later on, in 2005 year EP with 5 tracks in, entitled " Remorse Will Die Today", for "Pure & Simple Records". Actuelle album is a first full-length, released for "Deity Down Records", entitled "Destined To Burn", and looked the light of day on 30th June this year. Dark Intentions are band whose genre's approach are consists of few elements, and we can characterize its options as a sort of crossover. But they are also a modern act, and its performing variants are consists of thrash metal idioms mixing with strong 90's hardcore, and hidden death metal traces. A songs posses an intense atmosphere,where often tempo changes characterize practically a complete offering materials. "Destined To Burn" with 11 tracks in, and little more than 28 minutes of music, introduce a Holland fellows as a certain and convinceble band.
Rating : 8/10
C / o : www.darkintentions.com
www.deitydownrecords.com
Posted by Branimir Lokner at 2:05 PM