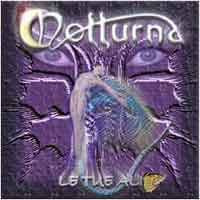 Out of Trieste comes band Notturna. They work as a trio, and key person in band is guitarist, vocal and author Michelle Rizzi. They were founded in 1987 year, and till now released 2 issues : "Illusion" ( 1998 ) and still actuelle "Le Tue Ali" ( 2005 ). Judging by its musical choices, a band succesfully has offered an original options, even that their performing forms, are more or less usuall on nowadays scene. Their music are consists of mixing elements where exists enough places for melodic rock and hard rock, with clear progressive rock traces. But, their key weapon is melodicity, and its songs posses narrative and emotive look and approach.

A band members are skillful performers, and each songs from album are done with respectable efforts and convinceble realizations. I have to say that Notturna is one of the most melodic outfits with I had face it in last few months, who performs that sort of music.And mentioned melodicity surelly helps them to spread its ideas to different listeners populations. "Le Tue Ali" as a album are consists of mostly coherent songs materials, without any specific one.