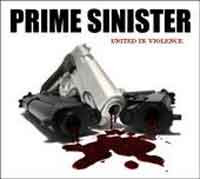 A French trio Prime Sinister is a newer act on scene. They started carrear at the end of 2006, but many happenings followed up it's expansion. After just few months they released a Demo, and their approach has been noticed by critic and public. They had oportunitty to introduced themselves not only on national area, but also abroad.Actuelle full-length looks the light of day at the end of March this 2008 year.
Prime Sinister in modern way tries to expand its performing horizons, and in their musical visions exist enough places for industrial metal and stoner rock as well. But, also we can find in offering music option many things in-between, maybe more psychologically, and legacies of acts as a Sigue Sague Sputnik or Zodiac Mindwarp aren' t unknown for band's authors challenges.

Prime Minister performs directly, with lotta' energy includings. Their sound is frantic, but in the same way disciplinized, and I would add - modern. All of present songs sounds coherently with similiar arrangments approach. Track "In Guns We Trust", band also offered as a video clip, and helps them in promotional campaign. "United In Violence" is interesting and optimistic album by French fellows, and surelly deserve recomandations.