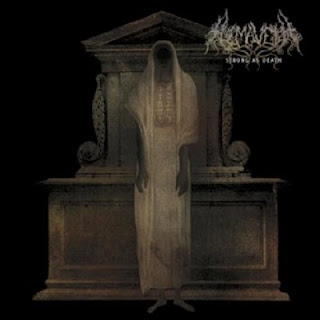 Hailing from Puerto Rico, a band Azmaveth has a actuelle album "Strong As Death", released for "Bombworks Records". They are coming from city Ponco, and started its carrear in 1999 year. They also had some discographical experiences, and firstly S/t album "Azmaveth" in 2004. looked the light of day, and later on, in same year, also a Demo identically named was followed.
Azmaveth are christian black metal act, and that formulation is ideal for different variants of
verbal polarizations and polemies, but that isn' t a main theme of this texture. Its sound is also full of symphonic elements, but hidden thrash details are present here and there too. It's interesting and unusual at same time, that some of group's songs has "expandier" concept, than the others, pretty shortened, consists of only a few unconventional tacts. As a album "Strong As
Death" oftenly went outside genre's maniristic options, and that's a positive element if we speak
about black metal acts. A band from Puerto Rico has offered in some places, some unusual but original creativities, succesfully avoided manirism as a final course. Surelly, as a band they have potentials, and we'll see what the future brings.