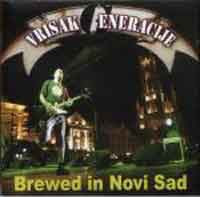 In the months of 25 years anniversary celebration of exsistence, a Novi Sad legends Vrisak Generacije are here with new album issue. Their publisher is "SKC Novi Sad" again. Predrag-Gaga Jandric frontman and author still lead actuel line-up, and with him are also bass player Marko and drummer Pedja. They recorded materials in all-time friend and collaborator Micke's studio. After some period, Gaga decided to return to roots, and to sound which defines it's carrear in first phases. So, there's no additional acoustic details, also pop elements are missing, and one strong punk/oi approach dominates on whole album.

A production, as same as psychology cover one earliest period, and knows to remind on second part of the 80's. A band performed all of 20 present tracks compactly, and it's evident that group has sounded as a coherent team. "Brewed In Novi Sad" as a issue satisfies die hard and oldest fans of group, showing that Vrisak didn' t change its basic direction and performing formula.Technically, a productional work didn' t satisfies, and in my opinion, even of genre's circulation and needings, band finally has sounded more as a act who comes from the past.But, that was group's decision, and surelly, Gaga knows what is the best for him and his band.