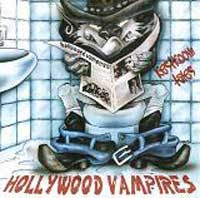 Italian band Hollywood Vampires is active on scene some period, and I had an opportunity to face them with their previous materials. They are also continiously present on Internet medias whose ocuppations belongs to sleaze/glam acts. "Restroom Tales" is their actuelle EP, comes out from previous year, with 5 offering tracks in. A group members penned a complete materials, consists of strong performing sleaze/hard rock songs, clearly influental by the 80's period. Maniristically, Hollywood Vampires has offered an expecting portion of music. Offering material is also well-produced, and I would mention 2 in my opinion strongest tracks as a : "Ordinary Man" and "Shot You Down".

"Restroom Tales" expectingly trace a clear direction evident on its first issues, and there's no any unknown newer details. Under the mentioned genre a band did maximum efforts and profesionalism. Finally, a band certainly need a little more originalities, so in that case I suppose , their status on worldwide sleaze scene could be better.