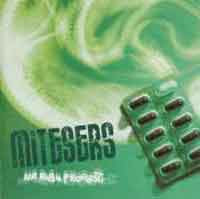 A Novi Sad based band Mitesers are act with longest uncontiniously activities. They were formed back in 1991, but many followers has threathed them ( and still threat ) as a side project of two active Atheist Rap members - Dulles and Radule. During the mentioned period they participated in several cassetes compilations, and as the rumours confirmed, a band did in their own one DVD home made issue. In the previous 2007 year, a first full-length "Na rubu propasti" band release for "SKC Novi Sad".
A 15 offering tracks duration little longer then 28 minutes, are done for 10 days work in studio, between December 2006 and March 2007 year. All except one song "Nada" ( Descendents - Gajic ) band penned as a own authors results. Mitesers combines elements of punk, easiest hardcore and melodic punk rock. Their lyrical options varied between local, even lover themes, to socio-political attitudes. It seems that complete materials a band has done in one breath, and the songs itself posses the same energy and performing approach.

It's interesting that in Novi Sad, same as some parts in Vojvodina, a band received a cult status, but in capitol Belgrade, and also in other parts of Serbia, band is absolutelly unknown, or known cause mentioned participations of Atheist Rap members. A present CD material mostly communicate with psychology of 90's period, and that's clear after litening of just few songs. A further steps of group are practically unclear, and depends of other activities of its members. "Na rubu propasti" in some way mostly promote band from its 90's days, when energy followed up youth ideals and attitudes.