ARMORY - The Dawn Of Enlightenment 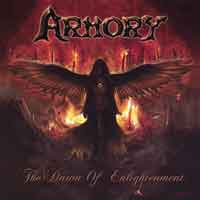 ARMORY - The Dawn Of Enlightenment

Out of Townsend, Massachussets comes Armory, founded back in 2001 year. From the very begining they threathed its carrear seriously, and in next phase they creates own approach which is combination of traditional metal and European power metal. In 2004 they recorded a first version of "The Dawn Of Enlightenment" album, but with final realization, a members from band wasn' t satisfied at all.
Also a promotional campaign failed. During the 2007 year a band re-record and release an actuelle version of "The Dawn Of Enlightenment" issue with new mix and production, and this time complete finalization satisfies group. Armory works as a sextet formation, and sound they had offered is colourful and vivid, and there are 10+2 bonus tracks on album.Also we can find here an interesting cover version of well-known Iron Maiden hymn "Flight Of Icarus".

Armory performs one variant of heavy/power metal with clear melodic includings, but also with influences comes out from the 80's period.They knows to remind more on European then USA acts, but they certainly seriously has threathed complete realization of album materials.Their arrangments are expandier and production is modern and convinceble enough, so I could add that there' s no weacker places on album.
"The Dawn Of Enlightenment" also includes epic and progressive elements as well, with coherent teaming performings of complete line-up.Judging by Internet informations, their album covers a relevant promotional campaign, and we can expect that band will find possibilities to come to wider audience population.

Labels: ARMORY - The Dawn Of Enlightenment