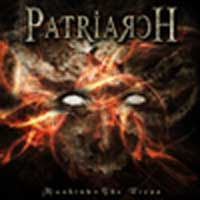 A Belgium fellows from Patriarch we can threat as a veterans on metal scene. They were founded back in 1983, under the monicker Pariah, but in 1988 they changed name in actuelle - Patriarch.During the 90's they recorded a two albums for German label "Shark records" - "Prophecy" and "World Within Worlds". They changed a line-up in 2005 year, and in following 2006, a Demo "Black Harvest", looked a light of day. Musically, Patriarch are followers of old school approach and tradition. They cover a heavy/power idioms, even that in their sound exists enough places for thrash and progressive includings, specially progressive elements occupied its conception.

A songs are vividly clear and concise, and band did a lotta' effort in realization of interesting and convinceble arrangments. There are 10 tracks on album, well-produced without any technical failurs. I have to say that band has offered an interesting design of its 12 page illustrated booklet. "Mankind=The Virus" we can threat as a coherent issue, without any specific leading song, and surelly it's material will be recomandable for the followers of older as same as newer school.