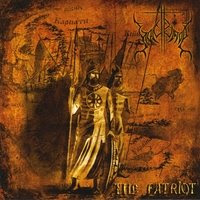 Out of Ukraine and capitol Kiev comes band Holy Blood, well-known to followers of newer tendencies under the folk metal as a genre.They were founded back in 1999 year, and till now released a 3 albums. A first one "The Wanderer" ( 2002.) was more orientired to death/black metal, where the following "Waves Are Dancing" ( 2004.) had more polished sound with folkie elements, but still with agressivities of black and death metal.
Actuelle album "The Patriot" has more folkie orientations than previous two issues. A band seriously did the realization of whole album, and some months ago videoclip with S/t track "The Patriot", circulated around the net. A Ukrainian band works as a quintet, and musically offered an interesting arrangments views, where under the electric performing concept, ancient and natural traditional instruments, in some sort of dialogues - coloured the sound.So, as a result we have in one side agressive vocal parts as same as energetic and frantic performings, than in the other as a contrary we can hear a warm and emotional passages. Even of growing ambitious of band's members in realities, today's folk/pagan metal scene is rich of better and more original band's, than the four guys and one lady from Holy Blood are. But, "The Patriot" with 9 present themes + bonus multimedia, is seriously done issue, with respectable technical includings.