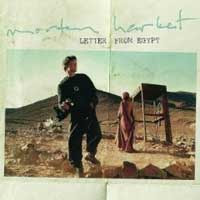 As a many of you surely knows, Morten Harket is a singer of sucessful Norway act A-HA, who its golden moments and glory days had in the 80's. His solo carrear also has some activities and dynamization, and actuelle album "Letter From Egypt" is his fourth issue. A songs from album are mostly slower and easier up-tempo, with expecting romantic flavour, acoustic intonations, and similiar arrangments approaches.

A key Morten's weapon is his warm and pleasent voice, but even of that, one monotonous atmosphere practically followed-up all of 12 songs from album. I' m not sure that Morten's offering materials could easily communicate with today's faster life tempo, with newer potential fan polulations, and that's a real problem for him.Even of rich and well-done complete technical details, "Letter From Egypt" is nothing more than one very boring and forgetable issue.