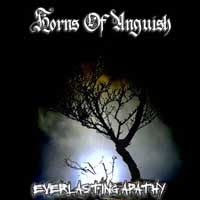 During the late period of 2004 year, a three younger fellows formed a band Grandma's Vomit. A saga lasted no more than two years, and two of three members started to create something new, and a band Horse Of Anguish was born. "Everlasting Apathy" is a Demo with 3 songs in, and it's clear that offering materials has introduced them as a serious and mature act. A Swedish mates are on the field of stoner and hard rock with strong doom influences and additionals.

Their songs posses clear emotional tension, arrangments works are vivid, without any boring details.They sounded compactly, and also as a band who strictly knows its capabilities and possibilities."Everlasting Apathy" is a promising Demo, whose qualities announce a certain future for band.