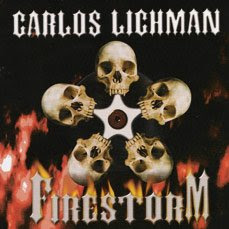 A Brazilian guitar player Carlos Lichman strated carrear as a classically trained performer. Later on, he found himself on more agressive therithory, and he recorded an EP "Wake Up The Dragons" with the band Neverland.In forthcoming period he was also discographically active as a solo performer, but "Firestorm",
album from 2007 year, was his first full-length CD.
Carlos is a guitar shreder, and his style is influental by the works of well-known artists as a Marty Friedman, Tony Macalphine and Paul Gilbert. Even that Carlos is a skillful performer, he's guitar techniques is mostly influental by the one oldest approach, and its evident from first to last track from "Firestorm" album.
Most energy a Brazilian fellow has given to his solo guitar techniques, we can also hear a few escapes in improvizations, but nothing specially new we couldn' t find here and there. A same mid-up, to faster tempo motorization is present in offering themes, but most of materials didn' t show any newer performing variants.