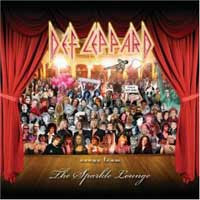 UK After 6 years of discographical inactivities, a British band is here with new album.Their highlights a group received in the crossing period between first and second part of the 80's, and also during the 90's their comercial success was followed. "Songs From The Sparkle Lounge" in some aspects suprisingly were done by the band members. A complete materials band didn't threat slightly and overproduced , and different direction id evident this time. 11 offering tracks shows authors and performing maturities of members from band, and one " coolest" atmosphere dominate through present songs.

Technically, all things are done in expectings mood, but one another thing also surprise, and that is a decision that cover of its album associate on well-known "Sgt. Paper" cover of legendary Liverpool's fabolous four. Possible, a band tried to compare themselves with famous Beatles, but at least that was their decision. "Songs From The Sparkle Lounge" are consists of songs with similiar quality standards, and also most of the materials are radio acceptable.