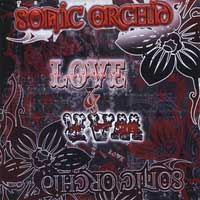 Out of Regina, Saskatchewan comes band Sonic Orchid. They work as a quartet and in formation have a female fronted singer Christine Gasparic. Her vocal capabilities are respectable, and she certainly also posses a very pleasent and colourful voice. They are active from 2002 year, and during the 2005, release an EP "Sonic Orchid". "Love & War" is an this year actuelle issue. A group is on the field of melodic rock and power pop, where we can also find elements of softier hard rock and pop metal. Sonic Orchid mostly covers 80's period, and as a band they sounds maniristically nearer to mentioned decade. Some associations in its music also comes to acts as a Lee Aaron and Sue Saad And The Next.

Melodicity is its key weapon, and its evident on all of 9 offering tracks.Some of songs are balaads, but complete materials posses listenable status and radio acceptables. Generally, I have an impression that better solution for Canadians could be "relocation in past" in mentioned 80's, where and when that sort of music had a certain worldwide threathment. It seems also that band's message is closest to older than to younger listeners population.