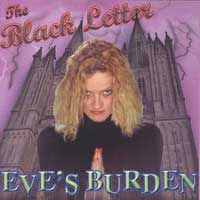 A newer name on USA scene is a band Eve's Burden, stationed in central California. In its line-up they have a female-fronted singer Sharon Jordan, and rest of formation are consists of quite good instrumentalists. Eve's Burden has introduced themselves with 16 tracks on album, whose methods of arrangments, productional and psychological threathenings are more orientire to legacy of 80's and 90's period, and melodic rock variants.

Even of that reality, Eve's Burden aren't a old-fashioned act. A mentioned Sharon has powerful voice, and she use a lotta' energy in her vivid interpretations.A songs presents on album are listenable and easy to acceptable to possible wider population. In the next year, in late February 2009, a band will start touring in Southern California.