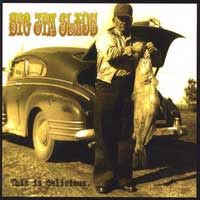 USA quartet Big Jim Slade is active on scene from 1997 year. They have released a 4 albums till now, and actuelle one "This Is Delicious", a band did with own forces as a self-released issue. BJS play sort of music which is pretty familiar on american land for a years, but even of that, its musical offering is convinceble enough. There are 15 tracks on "This Is Delicious" album, and complete offering materials are similiar among them.

We can find equal approach of rock, hard rock, and some grunge elements, but with one clear bluesy and melodic orientations as well. Also influences comes out from the 90's period are evident, but band productionally and technically didn' t fail in wrong direction. "This Is Delicious" are consists of radio friendly materials, and it seems that band can do a one step further with possible better promotional campaighn.