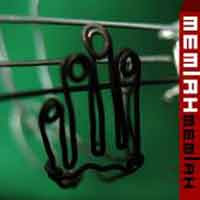 A Zrenjanin based band Memlah, its first performances started back in 2001 year. Their line-up are consists of experienced musicians, where most of them participate also in various other groups/acts. A band performing conception are orientire to instrumental solution, whose authors choice isn' t tipical on nowadays scene.
In its musical offering we can find elements of several genre's forms,among others - nu jazz, dub, electronic, rock, but technically, a members from band are faithfull more to one so call rock vision, then to expecting electronic options. A band has recorded complete album materials in Zrenjanin "Fat Factory" studio, during the 2005 year, and introduced itself with 8 instrumental themes, duration little less then 49 minutes.

Melodicity, a vivid arrangments creations, and skillful performings chahacterize offering material, and I would add, that under their style a band showed a respectable qualities. Finally, "Memlah" is recomandable issue, not only for the listeners who prefers a divirsities in genre's forms, but also for the fans of electro and dub heritages.