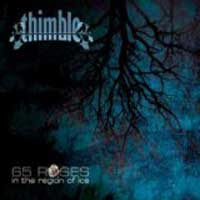 Out of Serbian town Kragujevac comes group Thimble, founded during the second part of the 90's. They work as a quintet, and as a band they participated in few compilation issues, and also during the 2001 year, released an album "Reason For Solitude". From the very first begining of its carrear, as a act Thimble has showed respectable potentials, but one unconventional promotional strategy and generally unserious approach of own legacy, as a result had a thin final score for them. During the previous year, a Belgrade based label "Multimedia" release its actuelle album " 65 Roses In The Region Of Ice", recorded in Budapest "Park Platz" studio.

A band its materials performs in English language, but their style isn' t easy to describe and define.A closest definition could be, that band is on therithory of some sort of crossover, where exists evident hardcore traces, screamo vocal lines, as same as post new wave psychology. I have oportunitty to caught band "alive" several times, and they are equally convinceble in its ideas in concert form, and in studio surroundings. Offering album materials confirms band's potentials, as same as a possible future musical direction. Unfortunatelly, band practically didn' t use a promotionals and marketing possibilities of its label, so finally their status on domestic scene is practically the same, like the case was in previous period.Sad, but true.

Labels: THIMBLE - 65 Roses In The Region Of Ice