NUESTROS DERECHOS - Struggling With The Dark 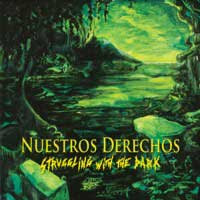 NUESTROS DERECHOS - Struggling With The Dark

Out of Holland city Utrecht comes band Nuestros Derechos. They work as a trio, and in line-up have one female member, bass player Janet, and she also share a vocal duties. They are active some period ago,and they aren't unknown in underground community. Their concept is absolutelly DIY, so with own forces they released an actuelle "Struggling With The Dark" EP CD. A Dutch act is on the field of thrash core, and its music cover elements of thrash metal, hardcore and punk.
They are infected by the 80's and the 90's period, but as a formation posses a energy of our time, and also they threats own songs through one modern view. A songs are mostly done in faster-up tempo, and its important to say that band also has offered a clear lirical attitude. Their songs are sounded absolutelly realistically and raw, without any polished moments. "Struggling With The Dark" covered them as a convinceble act with clear and distance message.