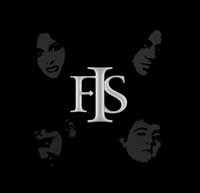 Out of Nashville, TN comes Faith In Shadows, band consists of 3 male and 1 female members. They were formed back in 2005 year, and it's interesting that the father of Jessie Wooten, a key person in group - Joseph is well-known songwriter and performer. Judging by its youth status, a members from band haven' t had a problem of offered musical direction. And band's option belongs to one untipical combination of rock, rap and alter elements.

Melodicity and pleasent vocalizations characterize its opus, and its also evident that enough influences comes out from the 80's, as same as from the 90's period as well.

As a band they sounded pretty coherent, and completelly they were done a good arrangments creations. But, it seems that production is pretty "thiny", and generally productional work is weaker part of complete realizations. There are 12 tracks on album, and in some places we can find interesting male-female dualities. If we exclude a mentioned weaker production, "Shadows Of My Mind", is a good start for band.

Labels: FAITH IN SHADOWS - Shadows Of My Mind