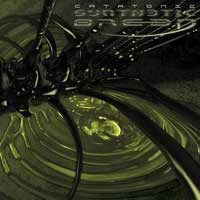 We couldn' t say for Synthetic Breed that they are newcomers, cos' its carrear started in 2000 year. During the mentioned period, they recorded a 3 EP's, 1 "live" album and actuelle full-length "Catatonic". Aussie fellows tries on modern way to equalize industrial approach with death metal pastiche and crossover realities. Their methods of playing is vividly agressive, and same elements follows up a vocal segments.

A similiar atmosphere characterize album in general. 11+1 themes are produced according to standards of our time, with evident presence od some minimalistic as same as hardcore details. They played all the tracks from album in furious up-tempo, and one uncompromized statement characterize them as a group in general.

We can agree that under the mentioned genre's form exists on nowadays scene several interesting acts, but we couldn' t eliminate a convincibless and uncompromisingness of Aussie mates. I will recomand for a special listener attention a 6th track from album, entitled "Modification And Replacement Of Inner Soul Circuitry".