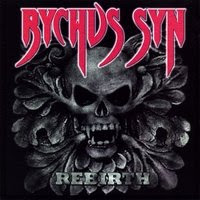 Out of Long Island, NY, comes band Rychus Syn, whose first steps dated from 1983 year. Unfortunatelly, they didn' t offer to much to audience except mini LP from 1989 year. But, still in those times, a group were noticed by loyal fan basis, and received from them a respectable cult status. As a title announce, "Rebirth" suppose to be a new begining, and album has recorded by four members from band. There are 10 tracks on album, also group has putted a 5 songs from mentioned mini LP, but judging by whole picture, a complete materials looks like a coherent concept.

"Rebirth" is a recomandable issue for all followers of the 80's metal and older school, and we can find here a strong riffs offering, a powerful screaming vocals, a shorter but convinceble songs, and effective guitar passages.And also a remarkable production. So, Rychus Syn are in the saddle again, and what is more important, they have to offer a positive attitude and relevant performing option. They could be quite satisfied with album, and promotional campaign will follow on forthcoming gigs.