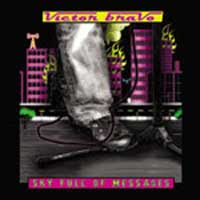 A group Victor Bravo are consists of 2 guys from Maine relocate in New York. They have offered an unusual performing option with only guitar,drums+vocal, but that doesn't confuse it's authors views. Musically, they deliver uncompromised variant of garage punk with clear noise and hardcore additionals.

A songs itself posses agressive approach followed-up by monotonous performing matrix, but luckilly without boring elements. A followers of earliest Stooges & Dead Boys legacy, but also a fans of Mudhoney & Husker Du can find enough interesting traces and motives in Victor Bravo's approach. " Sky Full Of Messages" are consists of 7 tracks, and my personal favorite is 6th one - "Motherfucker".