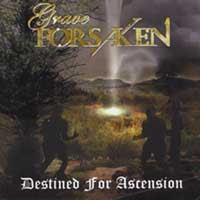 Australian act Grave Forsaken is active on homeland scene from 2004 year. Their carrear posses evident progress through years, as same as continuity. They started as a band with strong death elements, but now they find themselves as a thrash act with strong influences of many classical heavy details. "Destined For Ascension" has introduced themselves as a certain, strong and cohesive act, who sounds under the influence of clear 80's and 90's thrash.
In some of their songs we can find also a softier death traces, but also a more classic heavy idioms. A band's offering themes poses evident passion and performing energy. They aren' t melodic enough, and also we couldn' t say that thay are original too. But, as a band they showed enough convinceble elements and strong performings. "Destined For Ascension" are consists of 10 tracks in, and maybe a closing one "The Road To Damascus" could receive a better success in listener's population hearts.